So I am a Formula 1 fan. Like many dutch people I support Mad Max verstappen at the moment. But I first began watching Bernie's great show in the 1990's.  The aestethics of early nineties formula 1 cars have always been an inspiration to me. The clean, elegant lines, beautiful liveries and the combination of being very low and very wide are unique to this period in the sport. Compared to later years the cars are uncluttered and iconic. Each team had a unique car.

One day I ran across the great work of PJ Tierney, a very gifted illustrator. He had drawn the absolutely most beautiful F1 car of all time (not just according to me) the Jordan 191. And what I, and many others found amazing was the fact he had drawn the whole car in Adobe Illustrator. So all the shiny goodness was vector based...omg.
Here's a link to PJ's website and work

This got me both thinking and inspired. I bravely stated to some people I could also do this. ;-)  One problem: I did not feel I could better his work on this particular car. So I picked another beauty of this era and personal favorite of mine. The most elegant Leyton House from the 1990 season that almost won the French Grand Prix and was designed by legend Adrian Newey.
I thought it would be nice to let PJ know I was following his footsteps in his way. So I contacted him through twitter. He was very kind and gave me a lot of support and positive vibes during the project. I started somewhere in October and spent a lot of hours here and there throughout the month. Mostly weekends and evenings. Step 1: getting the necessary reference. This was immediately a problem. There where no blueprints available of this 25 year old car. Thankfully a CG 901 was recently restored and running again. So recent hi res pictures were available. Finding the correct reference was troublesome. There are so many variations in the depiction of this car...


Which is the right reference? They are all different :-(  I decided to just follow my instinct and make it look correct in my opinion. So this is by no means a technically correct illustration. Soon I started drawing shapes and details in separate document to keep the file size workable.
One of the subproject was getting al the sponsor logos in a vector format. Some were easy to find, others I had to trace or reconstruct.
All went pretty well until I started work on the wheels. PJ had already warned me for that moment. I got really frustrated in making the wheels. So many lines, details, textures, perspective and gradients. I must have redrawn them 4 times.

Most fun on this project was applying the lighting through the use of gradients. If done correctly it gives the impression of the object in 3D space. Here is an overview of the car with and without the lighting on it. Especially around the airbox, the shape is really defined.

After working on the car and keeping PJ updated via twitter, the car was more or less finished. Just cleaning up the layer structure and getting the details nice and tidy was all it needed. One final step is making a large size print and sending it to mr. Adrian Newey to sign it for me. Hope he will... 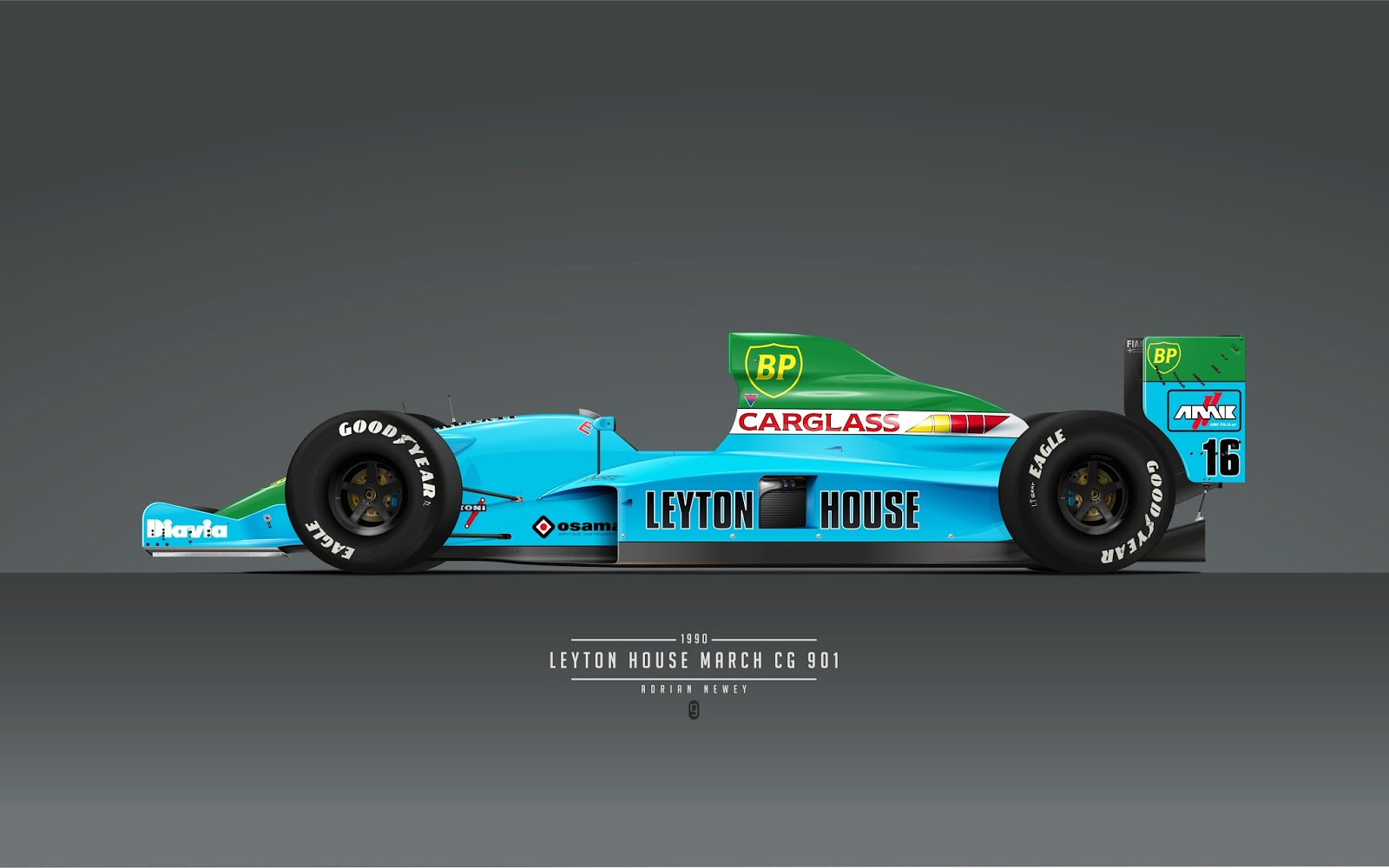 Final note. This is my artwork, please don't use it without permission.
Posted by selfish presley at 08:06